Our Future YOUR Path

Building Diversity for a Brighter Future in Political Leadership

Preparing for a Better Future with Greater Diversity in Political Leadership.

Councillor Trish Mandewo, Coquitlam City Councillor, founder and CEO of Synergy On Boards Consulting Group, shares how experiencing injustices as an intersectional woman empowered her to succeed in business and politics. 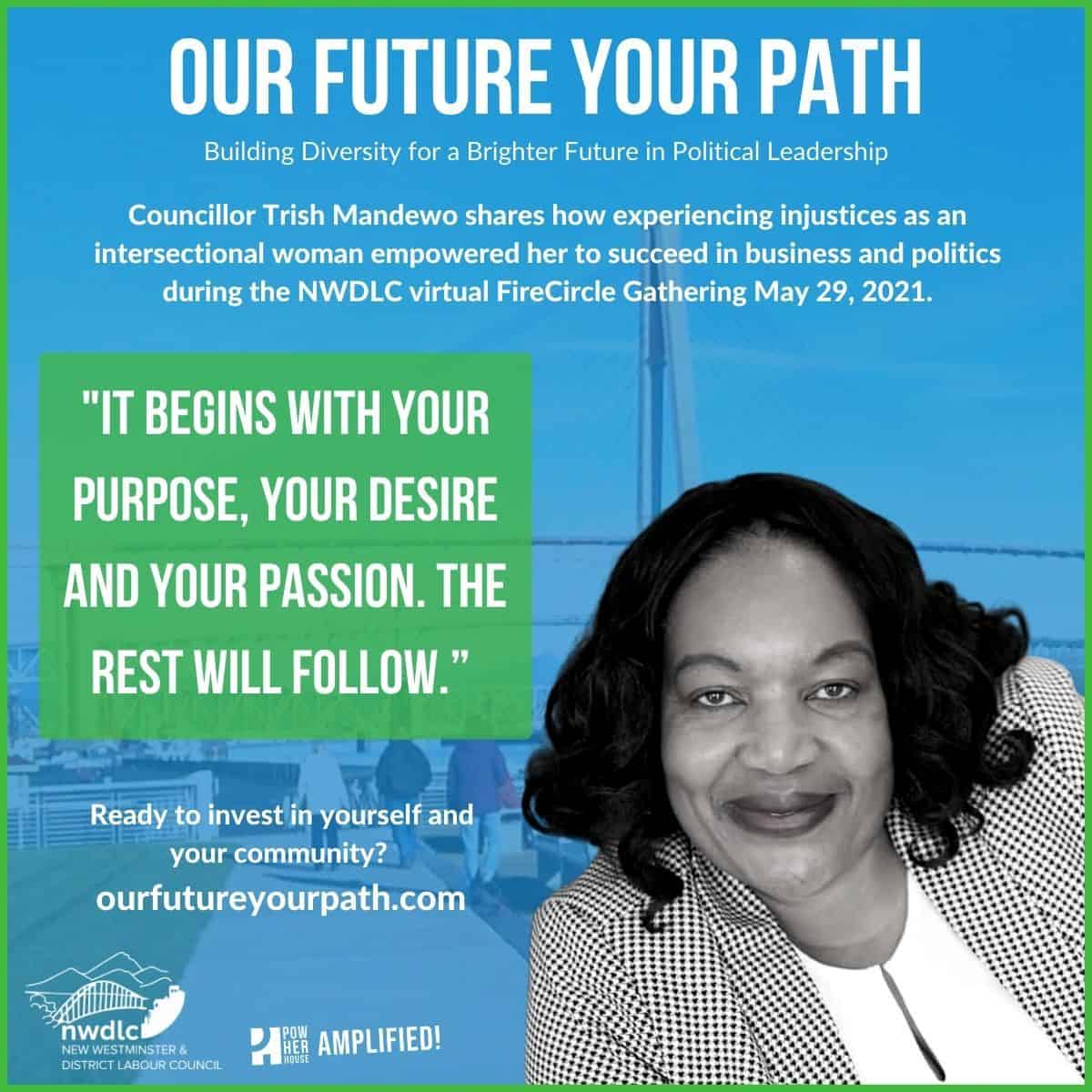 Trish Mandewo, mother, wife, microbiologist and embryologist, self-confessed serial entrepreneur, author and politician. A woman of breathtaking achievements who, as an immigrant to North America, is no stranger to systemic prejudices. Even with a top-notch resume that included managing a private fertility clinic in the USA, Trish found herself taking minimum wage jobs on arrival in BC. As an intersectional woman, her experience and academic qualifications were overlooked.

It may surprise many that in a recent study lead by researcher Lincoln Quillian, professor of sociology at Northwestern University, it was noted that relative to the United States, visible minorities in Canada were 11 per cent more likely to face discrimination in hiring. “Canada looks pretty similar to the U.S., in terms of its level of hiring discrimination against racial and ethnic minorities,” he said.  Trish experienced this first-hand in Vancouver.

Utilizing her life experiences, Trish had to let go of the science and medical profession and venture into entrepreneurship, first with a gym on wheels (Vancouver Tumblebus), followed by a performance-enabling company that focused on culture, diversity and organizational effectiveness within businesses and corporations.

Her extensive energy seems limitless. Not only has she served on numerous boards, but she also co-founded the Women’s Collaborative Hub Society, a nonprofit mandated to empower women and girls. Her dedication has paid off, and Trish has won numerous awards, including 2017 RBC Top 25 Canadian Immigrant, and is a recipient of Canada 150 Sesquicentennial pin for leadership and community service.

But winning awards is not what drives Trish. She is a firm believer in community involvement and is committed to public service. As an 11-year resident of Coquitlam, Trish put her hand up for politics.  The community saw what she had to offer and elected her to city council in 2018.

"You must be the change you want to see in the world."

The roadblocks and concrete ceilings Trish faced along the way fortified her values and beliefs.  Growing up with politically involved parents in Zimbabwe inspired her to seek a seat at the decision-making table.  “I was motivated by the injustices that I have experienced throughout my adult life.”

Trish believes that society undervalues women. Being a black woman and an immigrant elicits further intersectional challenges. Evidence shows that women of colour are seldom at the decision-making tables of governments and boardrooms. Trish’s acute intelligence challenges unfounded prejudices. Her vision is to see more women and more men and women of colour excelling in business and politics.

The recently published Diversity Disclosure Practices imparts the following facts:  “In Canada, women now hold 21.5% of board seats among TSX-listed companies disclosing the number of women on their boards”. Trish notes that this is slow progress in a “progressive’ country.

She admits that there is a lot of work to be done. Not only are women and visible minorities hitting their heads on the glass ceiling, but women come up against what she described as “the glass cliff effect”.  “They don’t have the support to be successful, so they do the arduous climb up the ladder and find themselves slipping back down.”

Her appeal is that women support and champion each other, particularly in the political arena and at the boardroom table. She calls it amplification, first instituted during the Obama administration. “Female staffers in the White House adopted a meeting strategy they called “amplification”: When a woman made a key point, other women would repeat it, giving credit to its author. This forced the men in the room to recognize the contribution — and denied them the chance to claim the idea as their own.”

What I Know Now!

“I’m a knowledge seeker ”, says Trish, “So I am always researching. I read everything relevant to stepping into the role of city councillor and as a business woman.  Decision making is easier when one has the facts, and If there is one thing she wishes she knew, it’s the fact that change is slow in politics.  “Coming from the corporate and entrepreneurial world, I was used to making decisions and implementing them fast.  It's not the case in politics. I’ve learned to be patient and guide with a steady hand.”

Since becoming a city councillor, Trish says that she is more hopeful about change because she has noticed that many people, who never considered getting involved in politics before, are now involved. The more diversity there is in all three levels of government, the more colourful the ideas and solutions will become.

“Since 2020 and significantly since George Floyd’s death and the rise of Black Lives Matter and the Stop Asian Hate movement, there is a higher level of consciousness. People are now open to having uncomfortable conversations and are asking: “Can you tell me more? What can I do to help?” There is hope, as people choose to be greater; they are slowly embracing the Ubuntu philosophy of living better together,” she concludes.

“If we emerge on the other side of this pandemic as the same people we were before, it will be shameful”, says Trish. “Covid has forced us to look at the problems in our society. I look forward to the data that will tell us more, and with this knowledge, we can create data-driven actionable items. We know that the people most impacted by COVID are women and people of colour. As politicians in service of the people in our local municipalities or government, we have to make sure that the inequalities do not continue and be proactive about things that we have ignored and can address within our local government framework.”

Trish is one of the panelists for the FireCircle gathering on May 29, 2021 that launches an innovative, inviting, and inclusive comprehensive engagement and preparatory program for women and non-binary people who may be interested in running a political campaign in the next one to five years.

The virtual FireCircle is a Saturday morning gathering hosted and championed by individuals who have held or are holding public office for individuals interested to learn more about public office and explore the possibility of preparing for it in the future. The FireCircle is designed to convene, inspire, and mobilize women and non-binary people to consider expanding their leadership through this unique and inclusive opportunity - OUR FUTURE YOUR PATH - to potentially prepare for public office.